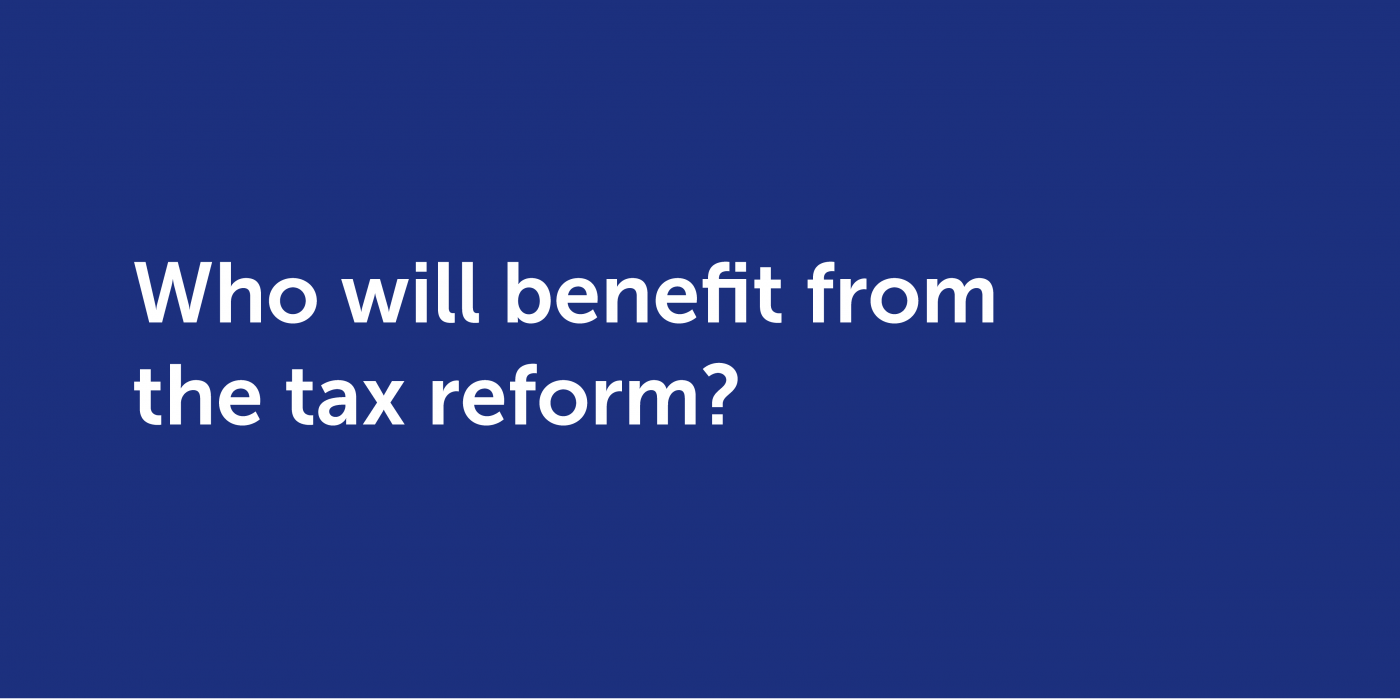 Who will benefit from the tax reform?

Index
Who will benefit from the tax reform?

The latest reform of the Austrian tax system, which came into effect at the start of 2016, was expected to reduce the burden on taxpayers by EUR 5.2 billion. It has now emerged that the reduction will not be as high: calculations by the Austrian Institute of Economic Research (WIFO) point towards a net decrease – i.e. including all newly introduced taxes – of around EUR 1.4 billion in 2016 and an estimated EUR 1.8 billion this year.

However, there have been lots of changes for the better: the introduction of an additional tax band for incomes of between EUR 11,000 and EUR 18,000 has brought relief for all those with low taxable incomes. They will now pay tax of 25% instead of 36.5%. The other tax rates and thresholds have also been reduced to the benefit of taxpayers, as have social security contributions, albeit only minimally. The negative tax – a rebate for workers who do not pay income tax and apply for a corresponding payout – was increased from EUR 110 to EUR 400 and extended to pensioners.

But who precisely will benefit from these changes and by how much? Will the tax reform result in a more equal distribution of income? And will the steps taken be effective in improving Austria’s economic position? To find answers to these questions, this Agenda Austria study looks at the direct impacts of the tax reform on all employees and pensioners.

First of all, the good news: the average net income of employees and pensioners rose in 2016, by around EUR 620 or 3.2% of average net income. But as with all averages, in reality not everyone benefits to the same extent.

More surprisingly, the biggest winners from the tax reform in 2016 were civil servants. They were followed by retired civil servants, who saw their tax bill fall by significantly more than blue-collar and white-collar workers and all other pensioners.

Looking at the relative reduction in the tax burden, upper middle class people with net incomes of between EUR 20,000 and EUR 40,000 benefited more than all other income categories, which also has an effect on the relative tax relief for the various professional groups. As members of the upper middle class, current and retired civil servants have the edge in this respect, with one exception: apprentices’ tax bills were cut by more than 5% of average net income as a result of the reform.

Average annual net income before and after the tax reform by professional group, 2016, EUR 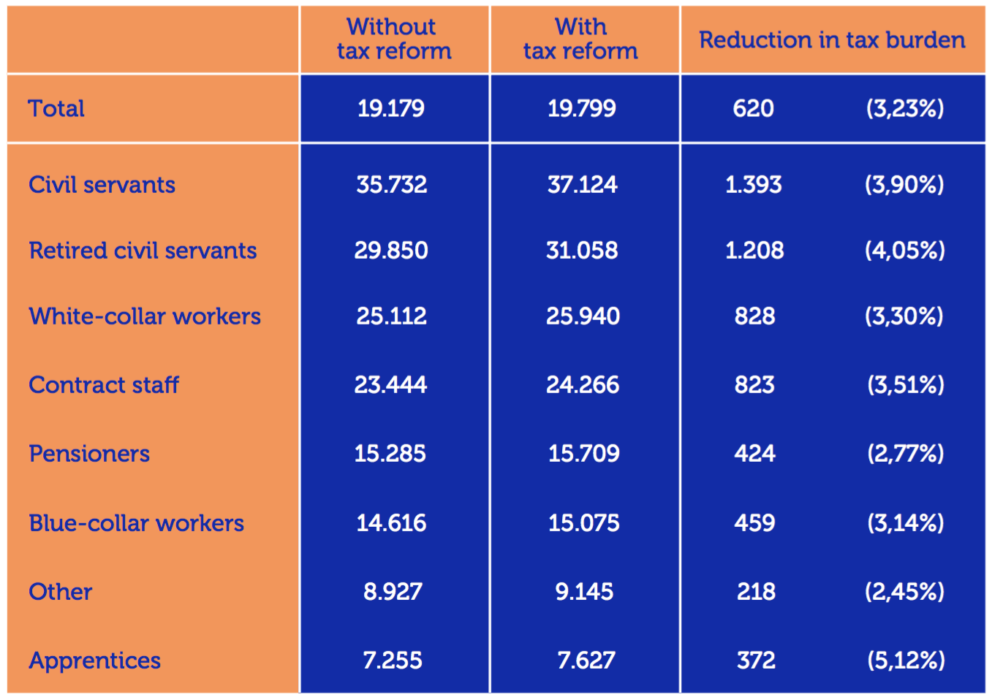 However, age hardly has an influence in terms of relative tax relief. With an additional EUR 297 of net income, under-25s lag well behind all other age groups, while 46-55-year-olds saw the highest increase in income, of EUR 838 per year. In relation to their net income, though, the reduction in tax burdens was fairly uniform across all groups, at either just above or just below the 3% mark.

The question of whether the tax reform has brought about a more even distribution of net income between people living in Austria is particularly interesting. According to analysis by Agenda Austria, the answer is yes and no: inequality between taxpayers and non-taxpayers is growing, but among taxpayers it is on the decline. The frequent assertion that income is not more evenly distributed because those in lower income tax bands benefit less than the upper middle classes turns out to be wrong. In fact, the opposite is true – and that may come as a surprise to those who bemoan the lack of fairness in the tax system.

In order to reduce the inequality between taxpayers and non-taxpayers, the government raised the negative tax from EUR 110 to EUR 400 as part of the tax reform. This rebate is available to part-time workers, apprentices, students on compulsory or holiday work placements, people in marginal employment and – as a result of the reform – pensioners.

The cost of this increase is put at around EUR 370 million. It remains to be seen how high the bill will actually be, because potential recipients have to apply for the negative tax. One thing is certain: the negative-tax increase will definitely help to reduce the greater disparity between tax- payers and non-taxpayers brought about by the reform – albeit not to pre-reform levels. So there needs to be further in-depth discussion of the purpose and effects of the negative tax. An extra EUR 400 in your pocket isn’t at all bad – but opinion is divided as to whether it is an effective tax instrument. Its positive effect on net income will only be felt indirectly, because it takes the form of a repayment after the end of the year. It also seems a rather unsuitable tool for encouraging recipients to work more. But from an economic point of view, this is precisely the important point.

When it comes to deciding whether to accept a job at all, the expected net wage is arguably the most important criterion. But for those considering whether to work more, the extent to which taxes and levies eat into each additional euro is the most relevant point. As far as this is concerned, things have changed: the new levy scales and tax rates give people earning about EUR 16,000 or more gross a year an added incentive to actually take a job, because their net income will be higher than a year earlier. Furthermore, working more also pays off more, because the tax burden resulting from each extra euro earned is lower than before the reform.

But this would not hold true for all taxpaying low earners if social insurance contributions had been cut, instead of raising the negative tax. Depending on the form it actually took, this would turn out to be more expensive at first, but also more effective: if social security contributions for all incomes below EUR 50,000 were reduced by one percentage point, employees would have more money to spend each month and the incentive to accept low-paid full-time jobs would increase, while the marginally employed and part-time workers would earn more by working more.

In contrast, the prospect of a social security rebate (negative tax) would at best be a motivation to remain in a job where pay is below the income tax threshold. More than anything, the negative tax is a subsidy for part-time workers, interns and the marginally employed – in other words, the kinds of employment relationship that should be kept to a minimum in order to safeguard the welfare state. Instead, the aim should be to transform as many part-time jobs as possible into full-time ones, and to curb the shift from full-time to part-time work.