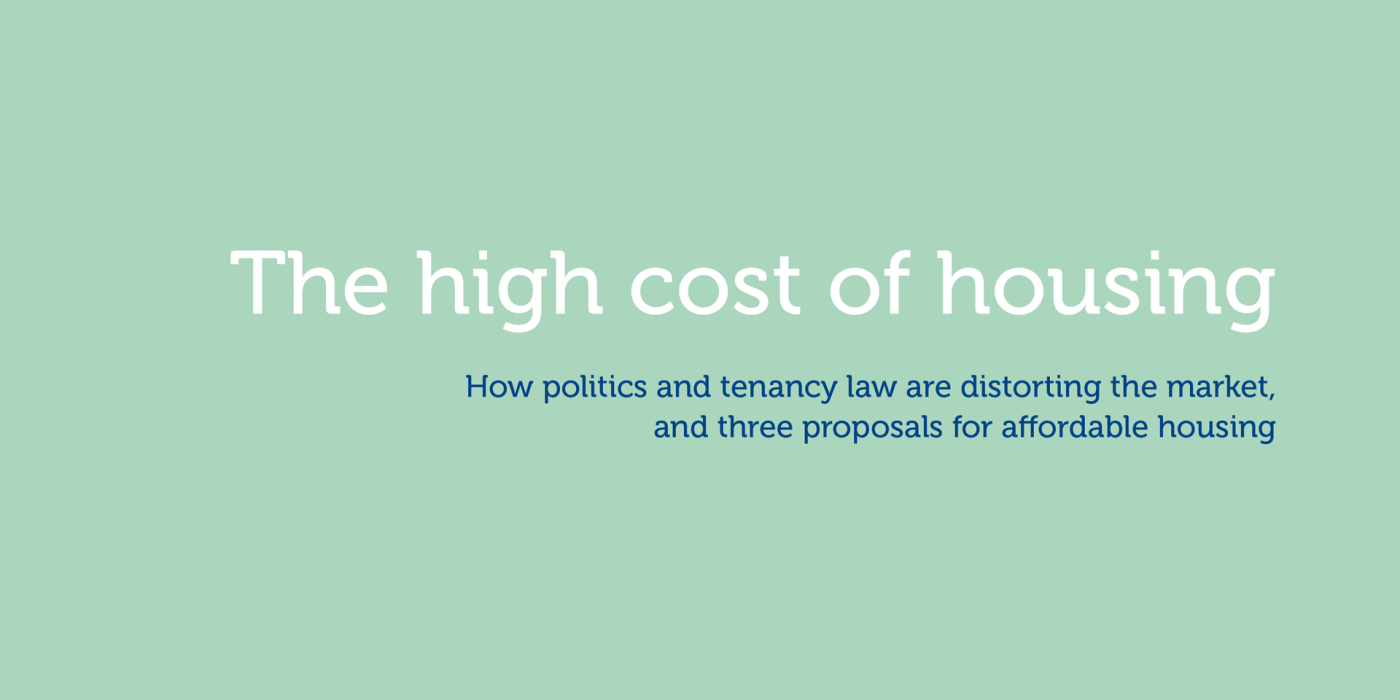 The high cost of housing

How politics and tenancy law are distorting the market, and three proposals for a ordable housing

Index
The high cost of housing

The aim of this Agenda Austria study is to shed some light on Austria’s problematic housing market – a complex and much debated state of affairs – and highlight solutions to make it function effectively.

The Austrian housing market is one of the most strictly regulated in the world. Three out of every four rental agreements signed are regulated, and in Vienna the figure is seven in eight. Aspects such as furnishings and building regulations are subject to this legislation, but the major focus is rent. Rents and property prices in the housing sector have risen sharply.

Remarkably prices have risen in the regulated areas of the market, as well as in those that function almost entirely freely. In fact, price levels are slightly higher for types of housing that are strictly regulated. This is due to the surcharges that may be included in rents for desirable older housing stock in urban areas. As a report from the Austrian Institute of Economic Research (WIFO) shows, housing is still relatively a ordable despite rising rents – on average, at least. This is because related household incomes have also risen during the period in question. But this “relative a ordability” does not apply to everyone as there are two very different kinds of tenants: new tenants are paying excessively high rents, while existing tenants with long-term contracts are protected from rising prices.

Even though rents have risen, returns for property owners in Vienna are lower than in almost any other European city. The major reason for this is that property prices in the capital have increased by 8.05% a year since 2005 – significantly more than both rents (3.6%) and in ation (2.1%). Nevertheless, the cost of housing will continue to rise, above all for new tenants in urban areas, where demand is high due to the considerable influx of new inhabitants.

There have been loud calls for increased expenditure on public housing and tighter rent controls in order to relieve pressure on prices. The imposition of statutory limits on rents (Mietzinsobergrenzen) is well intentioned, but in the end these measures only help higher income groups, because it further fuels the demand for housing in sought-after locations. The controls mean there are a larger number of people who can afford the rents in these areas, but in reality landlords choose the tenants who they think will be more reliable: those who can show they are high earners. While the better-off benefit from rent controls, rents for properties in the low-price segment are pushed up towards the maximum sums permitted by law.

Without more investment from the private sector, it will not be possible to relieve the upward pressure on rents. In a functioning market, rising rents will lead to increased supply, which will in turn result in a return to lower price levels. But in contrast to other countries, this principle does not seem to apply to Austria. Rent controls are too tight, there are too many other restrictions and expected yields are too low.

Supply will increase if the market is allowed to operate more freely – in tandem with more income-related assistance for tenants, so those in need of financial support actually receive it. The current supply-side approach in Austria of subsiding the building and renovation of properties is an imprecise, scattergun solution. And anyway, for years the provincial governments, which are responsible for allocating these grants and subsidies, have been using the money for other purposes.

Reforms are needed to increase take-home pay. This will make the cost of housing much more affordable. How will this work? If we make government more cost-effective, more of the money we earn will be left over for people to spend. In Austria, if your rent is EUR 1,000, you have to earn a gross salary (including tax and social insurance contributions) of EUR 1,545 to pay for it. The sum is EUR 2,852.47 for rent of EUR 1,500. If the Republic of Austria could make do with the same tax and social insurance rates as people in reunified Germany, then Austria’s inhabitants would have an extra EUR 15 billion in their pockets – every year.