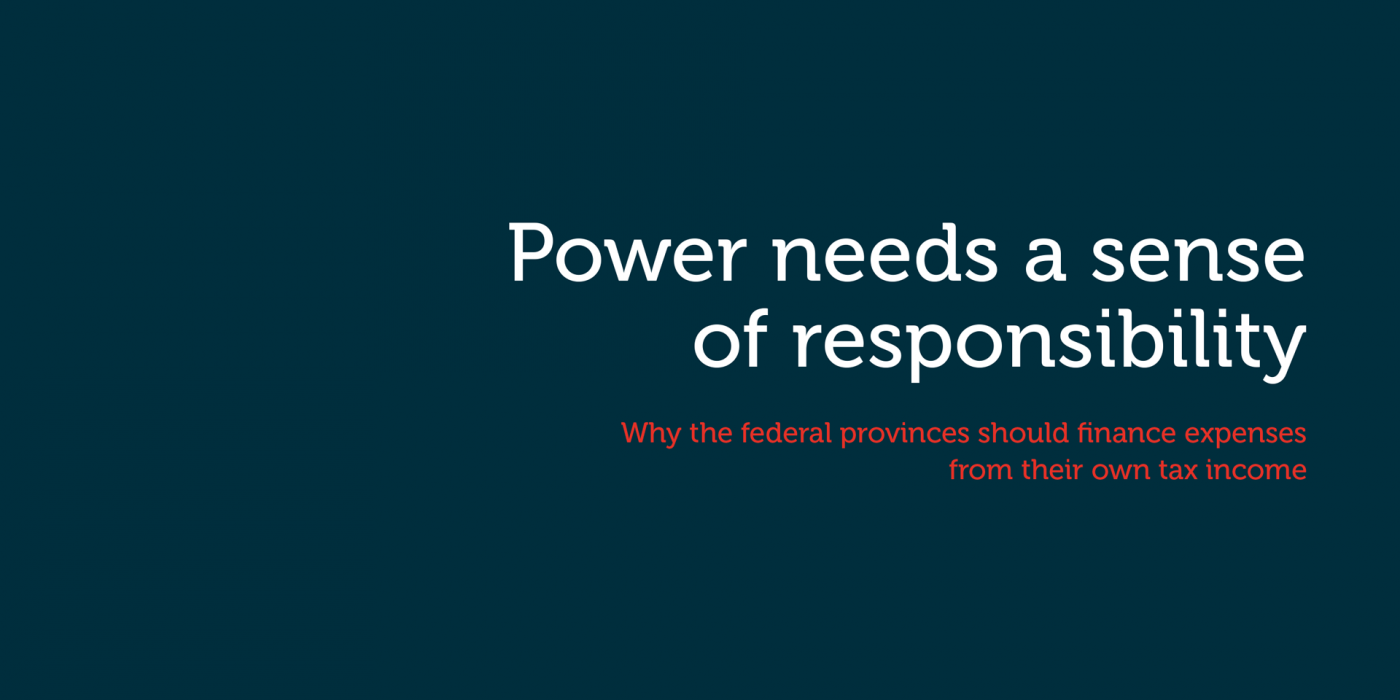 Power needs a sense of responsibility

Competition translates into better products and services. And tax competition between Austria’s federal provinces could lead to tax rates that are better suited to local conditions. Switzerland is a good example of this: in urban centres such as Zurich, local government has different responsibilities to that in a mountainous canton, and this is reflected in different fiscal policies.

At present, there are hardly any taxes that Austrian provinces and municipalities can set independently – they receive federal tax income in order to carry out their duties in accordance with a specific allocation mechanism, known as the fiscal equalisation system. This works in a similar way to price-fixing agreements between companies – the services that customers or in this case citizens receive are overpriced.

But how well placed would the different federal provinces be to compete for businesses or citizens by means of different tax rates? Which provinces are currently subsidised – through a fairly non-transparent system – by means of fiscal equalisation? For instance, how could remote rural areas become more competitive by offering attractive rates of taxation? How could fiscal autonomy be implemented in Austria? This study answers these and similar questions.

Income and corporation tax are best suited to tax competition, and both could generate substantial earnings for Austria’s provincial authorities. A specific model for greater fiscal autonomy would initially involve the federal government reducing these taxes and allowing the provinces to collect a at-rate, fixed surcharge. The provinces would then have to finance their activities from this income. This is in contrast to the current situation where the provinces receive funding from the federal government – hardly an incentive to save.

If such a uniform surcharge was introduced, individual provincial authorities would earn less or more than under the fiscal equalisation system owing to the differences in their tax bases (in terms of the number of high earners, companies and so on). Because fiscal equalisation is based on fixed allocation formulas, the federal government currently uses an opaque, scattershot approach.

But if the provinces were able to collect a uniform surcharge, the foundations for competition would be in place. The study estimates that the surcharge for income tax should be about 7.3 percentage points. Things are more complicated with corporation tax: the rates would depend on whether taxes are charged at the location of a company’s head office or those of its various production facilities.

The present system of hidden redistribution should be replaced by transparent scal equalisation, with richer provinces transferring money to poorer ones directly rather than via the federal government. More specifically, this would mean redistributing funds from Vienna, Salzburg, Tyrol and Vorarlberg to the remaining provinces, in particular Carinthia and Burgenland.

As far as income tax is concerned, Vienna, Lower Austria and Vorarlberg would collect more than they currently receive under the fiscal equalisation system, and the other provinces less. If each province aimed to collect the same amount in income tax as they do now, Vienna, Lower Austria and Vorarlberg could reduce their surcharge, and the remaining provinces would have to impose a higher tax rate, although the new rates would not differ too much from the old ones. New corporation tax rates would again depend on whether the tax is paid by a company’s head office or a production location.

The provinces would then be able to reduce their surcharges in order to attract businesses and employees. The drop in tax income would be compensated for by the influx of residents or by means of savings. Alternatively, provinces offering a competitive service portfolio would be able to raise their surcharges, for example to finance major projects. As the Swiss example shows, the tax burden is not the only criteria for taxpayers when it comes to choosing a place to live or do business. Good transport links, reliable health care and kindergarten places are just some of the other important factors.

The study uses a number of simulations to model the outcomes of such tax competition:

In other words, the study shows that Austria’s federal set-up costs a lot of money in its present form. But if the current disincentives were removed, a significant jump in prosperity would be possible.