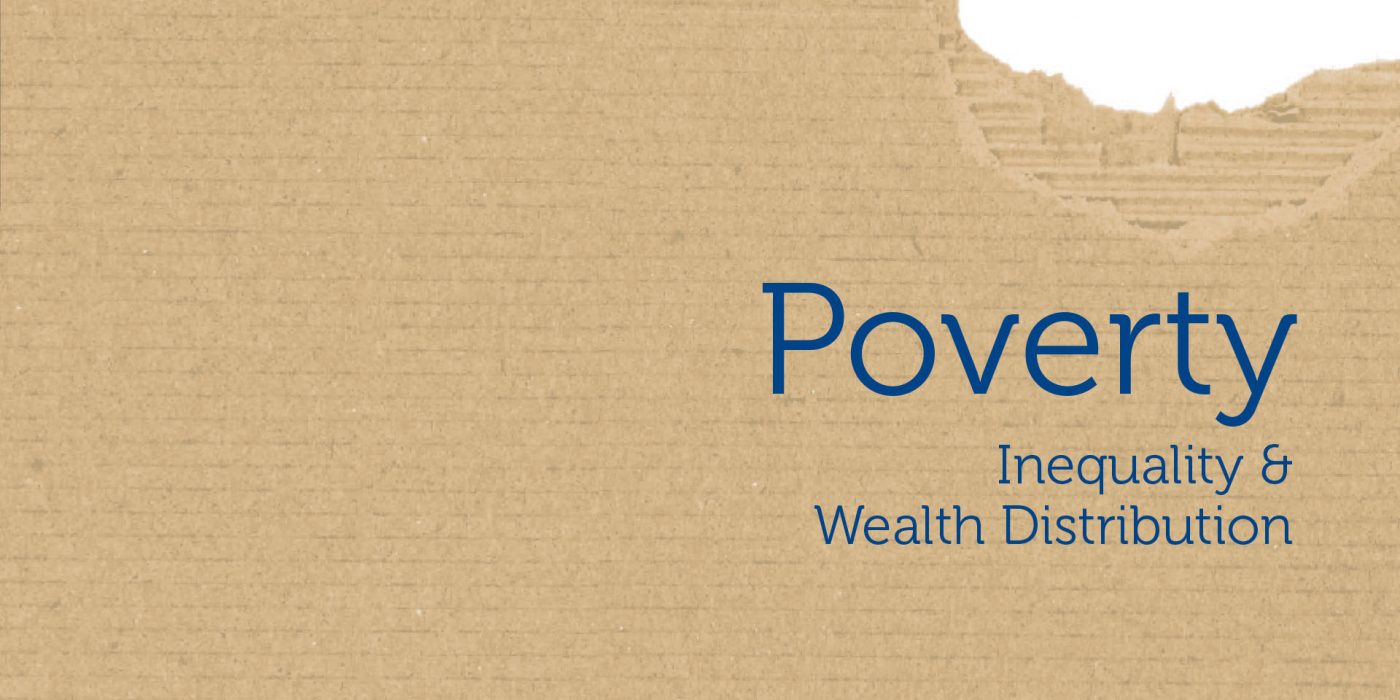 The handbook of intellectual self-defence, Volume 2

It is unwise to equate poverty with the uneven distribution of income and wealth. If everyone in a particular country is poor, then wealth is evenly distributed. Of course, most people would prefer a situation where everyone is well off. But measuring relative poverty also shows that even in a prosperous country where the entire population is comparatively rich, albeit with some better off than others, (relative) poverty will be ever-present.

In international terms, the risk of poverty in Austria is low, which is undoubtedly down to the country’s welfare state and the competitiveness of its economy. Austria has also succeeded in further reducing poverty in the past few years. But in spite of all this, poverty still exists in Austria, although the poor are now better o than they once were. As a result, the poverty threshold is rising constantly, and is currently one of the highest in Europe. Last year, anyone with net income of less than EUR 1,161 per month was deemed to be at risk of poverty.

In general Austrian income inequality is trending upwards (with some uctuations), although the increase is slight and barely measureable. Structural changes such as demography, education, migration, household structures and the labour market all have a significant impact on income distribution. In particular the trend towards part-time working can have a major effect on income inequality – one that cannot be ignored. This and other structural changes shed light on the reasons behind the changes in income distribution.

From a purely statistical viewpoint, a rise in the number of people retiring, the decision – usually voluntary – to go part time and young people moving out of their parents’ home at an earlier age will all lead to greater income inequality. These trends will presumably become more pronounced in the next few years, so we can assume that the upward trend
in inequality will continue. But this is not a sign of an economic system that has run out of control, but of an effective welfare state in which more people can afford to work less and move into their own apartment at an earlier age. In parallel, the ratio of workers to retirees will increase, which will automatically push up inequality owing to the drop in income connected with retirement.

Comparatively speaking, income is evenly distributed in Austria, but the opposite is true when it comes to wealth – there are only a handful of countries where wealth is more unfairly spread among the population, at least according to statistics. But contrary to claims in some quarters, there are a host of explanations for this. Wealth needs to be built up in the first place, so it seems reasonable that its distribution will be less fair than that of the income earned in the course of a lifetime. Older people who have worked and saved their entire lives are often far wealthier than university graduates entering their first job. Clearly, then, people at the end of their working lives are better off than those who are just starting out on their careers. This means there is far more mobility within a particular generation as far as wealth is concerned. An analysis of wealth distribution highlights not only the difference between the successful and the less successful, but that between young and old.

The situation would look totally different if public pension assets were taken into account – Austria would then be somewhere near the European average.

It is striking that wealth distribution in Germany is also particularly uneven. Interestingly, Austria and Germany have the highest proportion of people living in rented properties of all the countries analysed – or put another way, the lowest proportion of homeowners. This is due to political reasons, because by providing cheap housing the government subsidises rent payers far more heavily than homebuyers. The end result is greater inequality, since a house normally represents a household’s most valuable asset. The question is why Austria is so keen to provide subsidies for renting when supporting home ownership would reduce inequality in the long run.

In addition, household structures account for roughly half of the difference in net wealth between Austria and other countries. Households are far smaller in this country than elsewhere, mainly due to the continuing sharp increase in the number of single-person households. This reduces households’ assets, so wealth distribution becomes more uneven.

Although tax-based measures and redistribution are normally associated with a more even spread of wealth[1], there are various types of government intervention that have the opposite effect. A highly developed welfare system reduces the incentive for people to save for their retirement, leading to a rise in current consumption. For example, the Scandinavian countries of Denmark, Norway and Sweden are often seen as model welfare states, but wealth distribution is highly unequal in all three. [2] The supply of cheap (and subsidised) public housing for rent encourages people to become tenants instead of purchasing real estate; the latter is common in economies far poorer than Austria. High government debt drives up short-term consumption, because money is expected to lose its value, which in turn pushes down saving. This inflates the prices of assets such as real estate and equities, again resulting in greater inequality.

A worldwide analysis underlines the triumph of free trade and globalisation. According to the World Bank, the number of people affected by poverty around the world has halved in the last 30 years, to about a billion. Although far too many still live in absolute poverty, this is a positive development, especially for the world’s poorest countries, in view of the population explosion in recent years.

Global income distribution is also becoming more even over time. Income inequality is no longer the result of class distinctions within a society, but depends on a person’s place of birth. Countries that have opened up to the free market are far better placed than those that have not.

There is still a long way to go in the fight against global inequality, but we are clearly moving in the right direction – thanks to greater freedom, globalisation, innovation and growth.