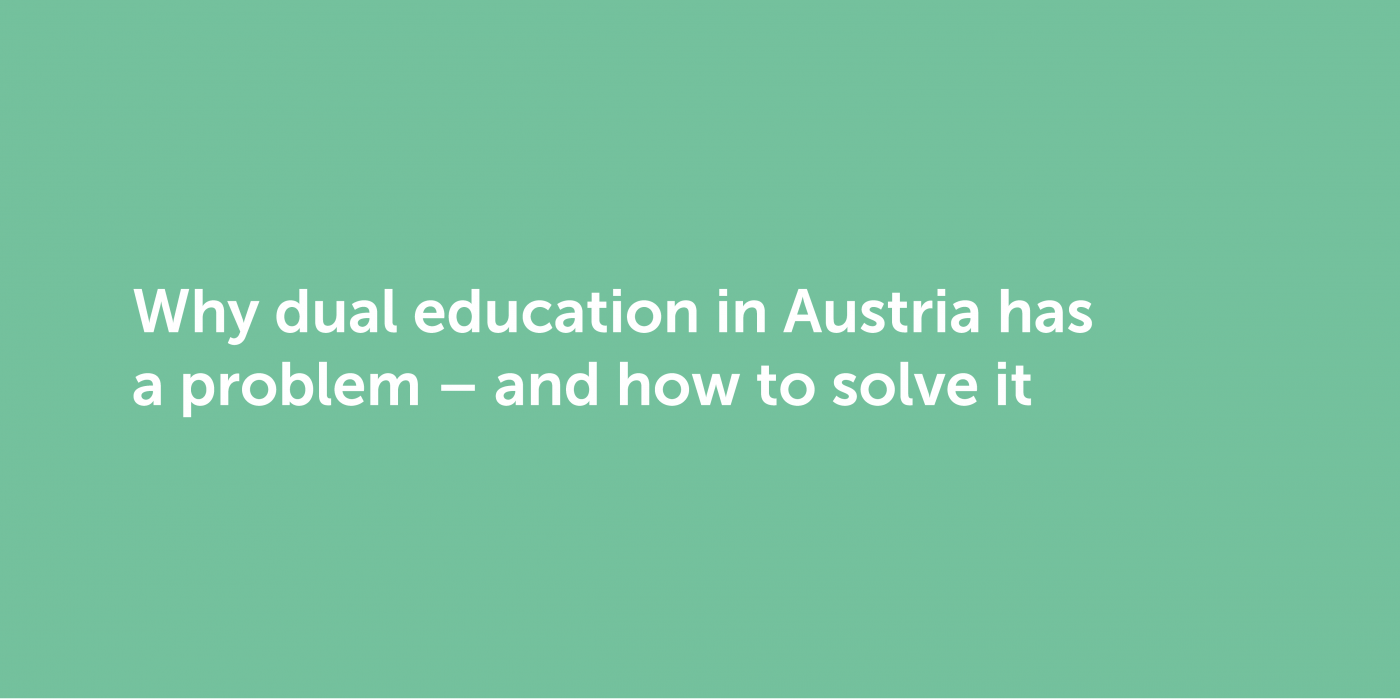 Why dual education in Austria has a problem

And how to solve it

Index
Why dual education in Austria has a problem

According to the Federal Economic Chamber, liberalising the Business and Trade Code would result in fewer apprentices. But their numbers have been dwindling for some time now. Apprenticeships need to be made more enticing, for example by enabling tradespeople to become self-employed after a year of professional practice.

The planned reform of the Business and Trade Code has sparked heated debate. The Federal Economic Chamber is strongly opposed to Agenda Austria’s proposal that strict regulation is only necessary for trades that pose a threat to people, animals or the environment (for more details, see “Why the Business and Trade Code is a rotten tradesman”, available at www.agenda-austria.at). The chamber argues that broad-based liberalisation of the code would lead to a significant drop in the number of apprentices, as was the case following the reform of the German Trades and Crafts Code in 2004. Austria is rightly the envy of the numerous countries which do not offer apprenticeships as a training option. The system has given rise to many positive traditions and remains a path to success for lots of young people. Which is reason enough for Agenda Austria to put the Federal Economic Chamber’s argument under the microscope. In our policy brief “Why dual education in Austria has a problem – and how to solve it”, we show that the chamber is wide of the mark. The number of apprentices is falling both in Germany and Austria, regardless of whether the relevant legislation has been reformed or not. “There are clearly other reasons why dual education has become less important in both countries,” comments Agenda Austria economist Monika Köppl-Turyna.

To begin with, the number of apprentices depends on population growth. So the number of young people who could start apprenticeships is declining. What’s more, fewer companies are offering traineeships on account of the less-than-rosy economic situation. “There is a disparity between the demand for and supply of traineeships: young people are looking in the ‘wrong’ industries, the available places are a long way from their homes, and would-be apprentices do not have sufficient knowledge,” explains Hanno Lorenz, co-author of the policy brief.

Agenda Austria also looked at whether the reform of the German Trades and Crafts Code led to a further drop in the number of trainees. Quantitative analysis shows beyond a doubt that there is no causal relationship between the reform and the number of apprentices. Instead of defending the Business and Trade Code, which justifies current privileges under the pretext of consumer protection or the alleged threat to apprenticeships, Agenda Austria is calling for a new approach: anyone who has completed an apprenticeship and has one year of professional experience in the same or a related industry should be entitled to set up their own business. Sectors with lots of vacant positions for apprentices should offer higher wages, or pay the same as under collective agreements. In the catering sector, for instance, higher wages would not lead to job losses, as shown in the Agenda Austria paper “Minimum wages: is there still scope for an increase?”. There should be more incentives for domestic mobility – this would enable prospective apprentices to move to areas where there are places on offer. School-leaving qualifications should be standardised. Only pupils who can provide proof of certain basic knowledge have achieved the goals of compulsory education, and this would also bring the demands placed on young people into line with their know-how. Targeted information about skilled professions and the options they open up would improve the image of many occupations. In spite of radical economic changes over the centuries, the apprenticeship system has stood the test of time, thanks in part to the steady implementation of essential adjustments. A liberalised Business and Trade Code will not pose a threat to that system.