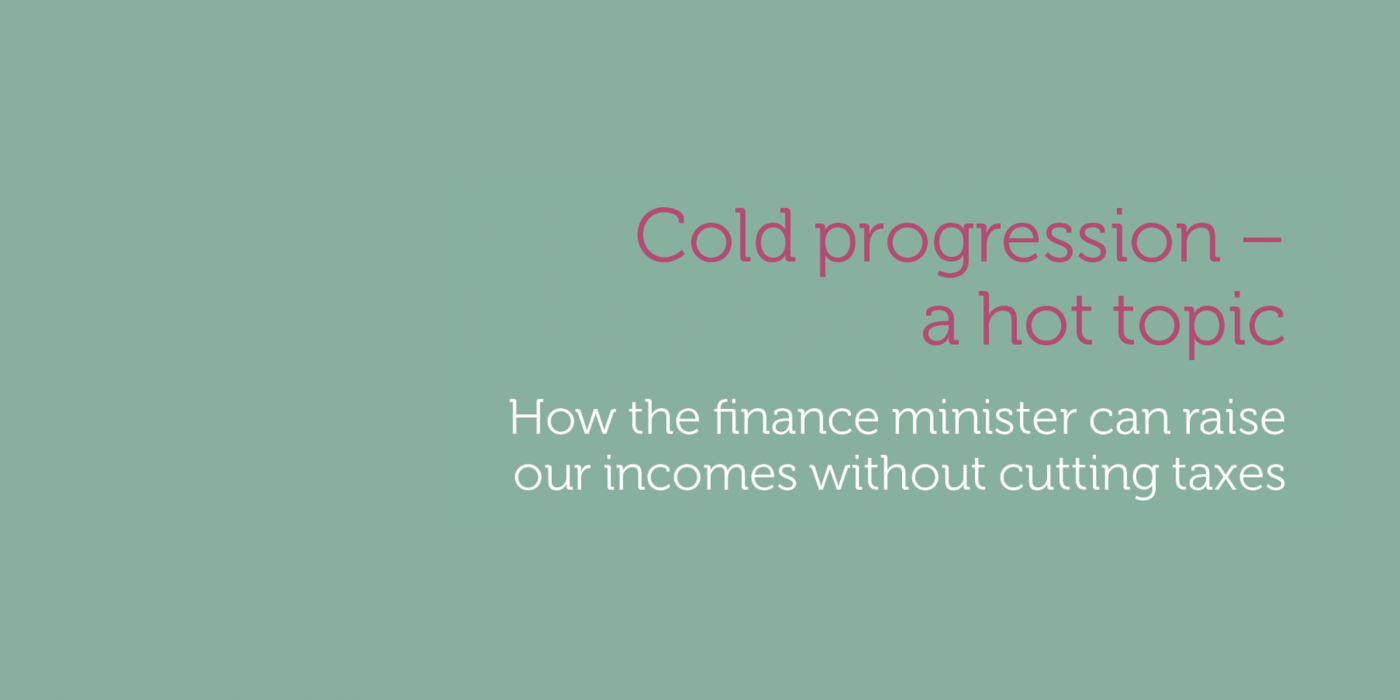 How the finance minister can raise our incomes without cutting taxes

The tax reform has come into effect, resulting in lower tax burdens for almost everyone. So for the moment people really do have more in their pocket after tax. But now the initial euphoria has died down, an honest look at household accounts reveals that somehow many people do not have more money for living expenses, saving and consumption. How come?

Of course, this is down to inflation and rising prices. And other taxes, including VAT on many goods and services, have risen as part of the reform. Company cars, hotel stays and cinema tickets now cost more. But in addition to the “usual suspects”, another factor, one that is far less well known, is sucking cash out of people’s pockets: bracket creep, a phenomenon known in German as “cold progression”. If no adjustments are made to tax rates – which is standard practice in Austria – over time the relationship between income and the amount of money that people actually have at their disposal becomes increasingly skewed. The economy is not to blame, nor is it down to inflation alone, but mainly a result of Austria’s overly rigid income tax system, which does not respond accordingly to changes.

Cold progression occurs incidentally over time, leading to an increased tax burden, and there is a risk this will occur in Austria again in the future. Blue-collar and white-collar workers, and civil servants receive pay rises that compensate for in ation and reward employees for increased productivity. Pensions are usually – but not always – raised in line with inflation. However, if the thresholds for progressive tax rates and tax allowances remain unchanged for years in spite of inflation, in many cases real net disposable income does not actually go up; in fact, it often falls. Consequently, cold progression is also labelled – not putting too fine a point on it – as a hidden tax. Although their income has risen, people’s purchasing power does not rise accordingly due to inflation and the resulting increase in prices. But the government collects more in tax, because everyone who earns more – even if only on paper – automatically pays higher taxes. So the state is the main beneficiary of many pay increases, not the individuals who have earned this money through their hard work. In this Agenda Austria paper, Dénes Kucsera and Hanno Lorenz look at the impact of cold progression over the next five years, from 2016 to 2021, and pinpoint who will be affected. They also describe ways in which other countries deal with the problem of cold progression. Can Austria learn anything from them? What if we tackled cold progression in the same way as Mexico, Spain, Switzerland or Sweden? Dénes Kucsera and Hanno Lorenz have analysed these options, drawing up some recommendations for Austria on the basis of their calculations.

Martha Mayer left out of pocket

To begin, let’s take a look at the status quo. Here we have Martha Mayer, an employee living in Vienna; she is not married and has no children. Her gross annual income is EUR 30,000, and she pays EUR 2,528 in income tax after allowances and other deductions, or 8.43% of her gross earnings. If her income only rises by the rate of inflation until 2021, as predicted by the Austrian Institute of Economic Research (WIFO), that year she will earn EUR 32,767. She would pay tax of EUR 3,227 on that amount, or 9.85% of her gross income – a full 1.4 percentage points more than at present, even though her real income has not increased. Cold progression leads to an additional burden totalling EUR 1,356 over five years for Martha Mayer as a result of this hidden tax rise. Maybe she could have used that money to treat herself to something nice. But instead the Austrian government gets the treat: thanks to cold progression and its impact on employees and pensioners, in 2017 it can look forward to a EUR 382 million rise in tax revenue. By 2021 the state will have upped the tax burden on citizens by a total of EUR 6.2 billion, equivalent to an average of almost EUR 1,000 for each employee and pensioner.

In Mexico, tax bracket thresholds are changed when cumulative annual inflation reaches the 10% mark. As inflation is lower in Austria, a 5% threshold could deliver similar results. The impact of cold progression could be cushioned, although this would still result in an additional burden of over EUR 4 billion by 2021.

Until the onset of the financial crisis in 2008, Spain increased its tax thresholds by a at rate of 2% each year. If Austria adopted this model, the burden on taxpayers would be reduced by EUR 375 million in the five years to 2021.

Our neighbours in Switzerland automatically adjust the majority of their tax rates and allowances annually in line with inflation. Implementing this approach in Austria for tax thresholds alone would push down the total burden on taxpayers to less than EUR 500 million by 2021. If all tax allowances were also adjusted, this would completely eradicate cold progression.

Up in Sweden, the government has gone one step further. Not only is the income tax system automatically adjusted in line with inflation; the evolution of increases in real income is also taken into account. Besides eliminating cold progression, this ensures that tax bills remain in synch with income. Changing the Austrian tax system along the lines of the Swedish model would translate into a total reduction in the burden on taxpayers of around EUR 1.6 billion by 2021. In contrast to all of the other approaches, the (overall) tax ratio for Austrian citizens would remain constant.

The approaches taken by the Swiss and the Swedes have one important advantage: they track real-life developments more precisely than the other models, which respond to changes in inflation either with a delay or with a blanket adjustment. Both the Swiss and Swedish variants allow for timely and effective reactions to changes. And this is what it boils down to. Using an alternative scenario where inflation is lower, Agenda Austria demonstrates why it is so important to make annual adjustments that are as accurate as possible. If inflation is lower, and a country waits until a certain cumulative inflation rate is reached, there is a danger that tax band thresholds will only be altered very late, leaving the impact of cold progression to unfold uninterrupted for years on end. Flat-rate adjustments like those implemented in Spain mean that the reduction in tax bills is too high in years when inflation is low. The government could then suspend adjustments and may choose not to reintroduce them when inflation begins to rise again, so people once more find they have less money in their pockets.

To ensure that in future Martha Mayer can spend the majority of her earnings as she wishes, Agenda Austria is once more calling for a change in the Austrian tax system, even though the latest reform has only just come into effect. This country needs a set-up that is progressive in every sense of the word, with automatic annual adjustments – ideally based on the Swedish model, with changes in both inflation and incomes taken into consideration. Even going down a similar road to our Swiss neighbours would significantly reduce the burden on Martha and her fellow citizens. This would not represent a tax giveaway, but simply a right that every taxpayer is entitled to.